At home in Big D, Kershaw looks to give Dodgers 2-0 edge 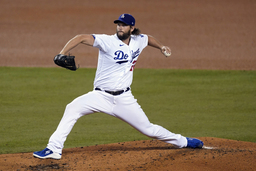 When the Los Angeles Dodgers faced an offensive dry spell early in the regular season, mild-mannered manager Dave Roberts fired back with a terse answer to a question about the struggles.

Even in a 60-game regular season, Roberts knew his team had time to turn things around, and indeed his club ended up leading the major leagues in home runs and runs scored.

"It happens every year that a group of guys aren't swinging the bat well," Roberts said at the time in a rare moment when he objected to the topic at hand. "We have this conversation every year. Every manager does."

Three games into the postseason, though, the Dodgers are scuffling again, although their four-run sixth inning in a come-from-behind, 5-1 victory over the San Diego Padres in the opener of the National League Division Series on Tuesday could be the breakthrough they were seeking.

The Dodgers were held hitless through five innings of Game 1 at Arlington, Texas, though they did score a run in the fifth on two walks and a throwing error by Padres second baseman Jake Cronenworth.

In Game 2, Los Angeles still might be OK with a mediocre offense. Dodgers ace Clayton Kershaw will get the start, coming off a dominating performance in the wild-card round against the Milwaukee Brewers.

The 32-year-old left-hander went eight scoreless innings and struck out 13 as the Dodgers advanced to the NLDS. It was his career high for strikeouts in a postseason game.

Kershaw's rocky playoff history always hovers over him, but on the back half of his career, he seems as determined as ever to finally win a World Series after pitching in the postseason in 10 different years and 18 series.

Adding to his postseason energy in 2020 is that he is pitching in the Dallas area, where he grew up. The Dodgers could end up playing the NLDS, the NL Championship Series and the World Series all in Arlington, if they advance that far.

"This whole thing is weird," Kershaw said. "It's definitely different to be in Dallas and have to stay in a hotel and things like that. Both teams are dealing with it, and I'm not the only one with family in town. It's even more reason to make it to the next round, so (family) can watch."

The Padres had not announced a starter for Game 2, with manager Jayce Tingler saying after the game that the coaching staff would discuss what to do. Tingler made Mike Clevinger a late addition to the NLDS roster, and the right-hander started Game 1 but left in the second inning due to arm tightness.

San Diego was holding its own using a string of relievers until the Dodgers rallied in the sixth on four hits, two walks and a wild pitch.

The Padres ended up using nine pitchers for the third time in their four postseason games. In the other contest, they used eight pitchers.

"We knew they're a disciplined team and they didn't chase," Tingler said. "We had to do a better job of filling up the (strike zone). At the same time, we had some chances offensively and they made some big pitches to get out of some jams. We couldn't capitalize early."

Tingler's frustration boiled over in the sixth inning following the Dodgers' first hit of the game, a double by Mookie Betts. Tingler argued a pitch earlier in the count and was tossed by plate umpire Lance Barrett.

"I like Lance; Lance is good," Tingler said. "We disagreed on the strike zone. It's as simple as that."