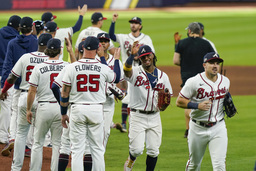 Having suffered losses against Atlanta's top two starters, the Miami Marlins get a crack at the Braves' questionable pitching depth in Game 3 of the National League Division Series on Thursday afternoon in Houston.

Right-hander Kyle Wright (0-0) will get first shot at earning the second-seeded Braves a spot in the NL Championship Series when he opposes Marlins righty Sixto Sanchez (1-0) with a 2-0 lead in the best-of-five series.

Home runs have been the driving force in Atlanta's 9-5 and 2-0 wins, with Dansby Swanson and Travis d'Arnaud belting one in each contest after Ronald Acuna Jr. got the ball rolling with a leadoff shot in Game 1.

Home runs have not been the Braves' friend with Wright pitching this season, especially against the sixth-seeded Marlins.

The 25-year-old, who has never pitched in the postseason, went just 2-4 with a 5.21 ERA in eight regular-season starts that could equally be divided into hot and cold categories.

Wright started four wins, during which he allowed just five earned runs and 16 hits, including a pair of home runs, in 22 1/3 innings.

His two starts against Miami in the regular season both fit in the latter category. In 8-2 and 8-0 defeats, he was roughed up for nine hits, including three homers, and eight runs in seven innings.

In his career, Wright has gone 0-2 with a 6.92 ERA against Miami in three starts, during which he has never retired Marlins catcher Jorge Alfaro, who has gone 4-for-4 with two homers and two singles.

With his team having produced most of the power in the series for two games, Braves coach Brian Snitker noted after Wednesday's win that it's equally important to keep the opponent in the ballpark as it is to hit your own homers.

Sanchez (1-0) pitched twice against the Braves in the regular season. The Marlins split those decisions, with Sanchez allowing seven hits and four runs in nine combined innings (1-0, 4.00 ERA). He went head-to-head with Wright in the 8-0 Miami win at Atlanta on Sept. 8.

The 22-year-old rookie didn't allow a homer in either of those games, nor did he give up a run of any kind in five innings in a 2-0 win that eliminated the Chicago Cubs last week.

Marlins coach Don Mattingly praised his Game 2 starter, Pablo Lopez, for his effort on Wednesday, and hopes Sanchez can avoid the few mistakes that spelled the difference between win and loss.

"These guys have a lot of good hitters," he noted. "You miss your spots ... Sometimes you get away with it, sometimes you don't."