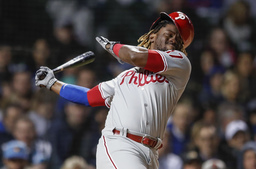 Herrera was designated for assignment on Tuesday to make room on the roster for Martini. Herrera was suspended last season under Major League Baseball's domestic violence policy following his arrest at a casino in Atlantic City, New Jersey, on domestic assault charges.

The charges against Herrera were dismissed, but the 2016 All-Star remained on the suspended list.

Herrera hit .222 with one home run and 16 RBIs in 39 games and lost his starting job last year before his suspension.