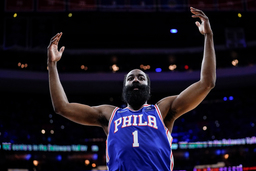 PHILADELPHIA (AP) The Philadelphia 76ers are being investigated by the NBA for possible tampering in offseason free-agency moves involving James Harden, P.J. Tucker and Danuel House, a person familiar with the situation told The Associated Press on Friday night.

Harden signed a deal worth slightly over $68 million, paying him about $33 million this season with a $35 million player option for the 2023-24 season. Harden, though, will make about $14.5 million less this coming season than he could have earned under his previous deal. Harden had a $47.4 million option for this coming season that he declined last month, saying he wanted to give the 76ers flexibility to improve their roster and compete for a championship.

ESPN reported Friday there are questions involving Harden and the Sixers having "a handshake agreement in place on a future contract."

"Taking less money this year to sign as many players as we needed to help us contend and be the last team standing was very, very important to me," Harden said in an interview this month with The Associated Press. "I wanted to show the organization, the Sixers fans and everybody else who supports what we're trying to accomplish, what I'm trying to accomplish individually, that this is what I'm about."

Tucker signed a $30 million, three-year contract and House signed for $8.4 million over two years. The Sixers were able to sign Tucker to the full mid-level exception and sign House to the bi-annual exception because Harden declined his option.

If Harden had opted in before his June 30 deadline, Philadelphia would have had a much more difficult time in finding financial pathways toward luring free agents.

The NBA approved stiffer penalties for tampering in 2019 and stripped a draft pick from both the Chicago Bulls for early contact with Lonzo Ball and the Miami Heat for doing the same with Kyle Lowry in the summer 2021.