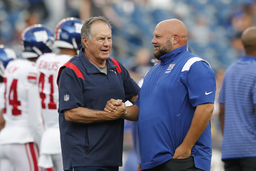 EAST RUTHERFORD, N.J. (AP) If there has been a takeaway from the first two weeks of the New York Giants' training camp, it's been the signs Saquon Barkley is once again close to finding his top form.

The ACL injury is almost two years removed and the No. 2 pick overall in the 2018 draft is running with conviction, confidence and power.

The running game has shown depth and it has a new improved line to run behind.

New York ran for 177 yards on 33 carries in their 23-21 preseason win over the Patriots on Thursday night in Brian Daboll's debut as head coach. That's a 5.4-yard average.

Barkley only played the opening series, but he had four carries for 13 yards and caught an 8-yard pass on third down to keep alive a drive that resulted in the first of three Graham Gano field goals.

First-year pro Antonio Williams led the team with nine carries for 61 yards, with a long of 19. Second-year pro Gary Brightwell had seven carries for 40 yards and rookie free agent Jashaun Corbin of Florida State had six carries for 23 yards and five catches for 28.

Matt Breida, the six-year veteran who is supposed to be Barkley's backup, didn't play.

"It's a competitive room," Daboll said Friday. "They're tough, doing a good job with the system. You know, they're a very supportive group. Even though it's a competitive group, they run downhill with power, break tackles."

The one negative was Brightwell missed a block in pass protection and quarterback Daniel Jones was hit around the knees while stepping forward to make a pass. He was not hurt.

Barkley, who didn't play in the preseason last year, said he felt good.

"I think our offensive line did a great job," said Barkley, who rushed for 593 yards in his post ACL season. "We were able to move the ball."

Overall, the offense gained 418 yards and ran 81 plays with new offensive coordinator Mike Kafka running the show. Daboll has not said who will call the plays once the regular season starts.

There were negatives, too.

Cornerback Aaron Robinson, who was given the job on the left side after James Bradberry was released in a salary cap move, was beaten on consecutive deep throws in the first half. Daboll didn't seem concerned but the depth at the position is thin with rookie Cor'Dale Flott sustaining a groin injury in the game.

The offensive line also was banged up. Left guard Shane Lemieux injured a toe early and was later seen in the sideline in a walking boot. Backup tackle Jamil Douglas sustained an ankle injury in the second half.

Daboll had no update on any of the injuries on Friday.

Receiver Kadarius Toney, who missed seven games last season, was left in New Jersey for the preseason opener after tweaking a knee or leg in practice on Tuesday.

Daboll said receiver Sterling Shepard (Achilles tendon) and linebacker Azeez Ojulari (hamstring) are making progress, but he had no timetable for their coming off the physically unable to perform list.

The team is off Saturday and will return to practice on Sunday. The second preseason game is at home against the defending AFC champion Cincinnati Bengals on Aug. 21. ---