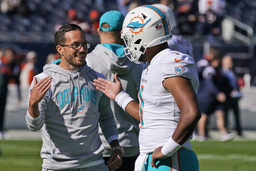 MIAMI GARDENS, Fla. (AP) When Miami Dolphins coach Mike McDaniel roams the sideline, his hands are usually relaxed in the pockets of his sweatpants. He doesn't often stray from his calm demeanor, and there's always a hint of optimism, and humor, in his words.

"Mike's not your stereotypical head coach," quarterback Tua Tagovailoa said. "He's not a screamer. He's not a yeller. If you mess up on a play, you're not the worst player in the world. `Why did you mess up on that play? How can we help you fix that?'"

McDaniel showed his optimism during an early conversation with Tagovailoa, when the first-year coach promised to get " greatness " out of the Dolphins' young quarterback.

The season before, the Dolphins were trying to trade for then-Houston quarterback Deshaun Watson and had talks the NFL later deemed " impermissible " about bringing Tom Brady to Miami. They were coming off a rollercoaster 2021 season in which they lost seven straight games, then won seven straight.

Now, McDaniel is delivering on his early words, and he and Tagovailoa are feeding off each other. Tagovailoa has bought in to McDaniel's system and is having his best season as a pro.

As a result, the Dolphins will exit their bye week at 7-3, leading the AFC East and with a legitimate chance to make a deep playoff run. Miami has wins over New England, Baltimore and Buffalo as it readies for a stretch of four of six games against teams above .500.

Tagovailoa leads the NFL in passer rating (118.4) and has thrown for 2,265 yards and 18 TDs with three interceptions. Miami is 7-0 in games Tagovailoa has finished, has the third-best passing offense and is first in yards per pass attempt (8.28).

Tagovailoa's accuracy on deep balls has also improved. He went from completing 42.3% of passes that traveled at least 10 air yards in his first two seasons to completing 68.7% of those passes in 2022, according to Next Gen Stats.

Throwing the ball to Tyreek Hill, the NFL's receiving yards leader, obviously helps. But just as important, Tagovailoa has more support and encouragement than he's had since he was drafted out of Alabama in 2020.

"I felt supported from the time Mike came in," Tagovailoa said earlier this month, a day after Miami traded away its only 2023 first-round pick to acquire pass rusher Bradley Chubb from Denver - a sign of its confidence in its signal-caller.

Since returning from a concussion in Week 7, Tagovailoa has 1,230 yards passing, 10 TDs and no interceptions. FanDuel Sportsbook currently has Tagovailoa tied with Philadelphia's Jalen Hurts and Buffalo's Josh Allen as the favorite for MVP.

McDaniel is among the favorites for Coach of the Year, and the Dolphins have the eighth-best odds of winning the Super Bowl.

"He is a man of the people," Tagovailoa said of McDaniel after Miami's 39-17 win over Cleveland. "He has no ego, no ego towards what he believes is right or wrong. But then again, it's `our team' is what he will tell you. I think just him being himself is really what helps us be able to be ourselves as well. We don't have to be anyone we're not."

McDaniel said Tagovailoa's ball placement and efficiency have made it easy to be aggressive in his play-calling, adding that Tagovailoa is seeing the field well and putting strain on defenses with his ability to move through his progressions.

But what has made McDaniel most proud is Tagovailoa's increased confidence, something he wanted his quarterback to work on earlier this season.

"He has really come into his own skin in regards to being a leader at the quarterback position," McDaniel said. "Guys are rallying around him. He is demanding a standard and holding himself at a tremendous high standard himself."