Jacob deGrom to return for streaking Mets vs. D-backs 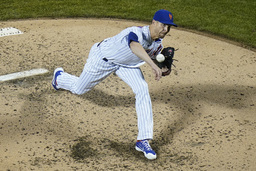 Jacob deGrom is slated to return to the mound on Sunday when the New York Mets look to complete a three-game sweep of the visiting Arizona Diamondbacks.

The two-time Cy Young Award winner missed his last outing due to right lat soreness and will be stepping on the hill for the first time since April 28.

The 32-year-old deGrom let loose in a bullpen session on Friday and was cleared to start against Arizona. He will be looking to boost the Mets' winning streak to five games.

"Any time you're talking about someone that special, it's a relief whenever there's any kind of potential health issue," Mets general manager Zack Scott said prior to Saturday's 4-2 win against the Diamondbacks.

"It wasn't something that anyone thought was a major issue. He did throw his bullpen and was throwing 98 (mph) and looking good. So he's ready to roll," Scott said.

The right-handed deGrom has been superb in five outings this season, and has 59 strikeouts in just 35 innings.

He has allowed more than three hits just once in five starts, and he also struck out a career-best 15 batters in one outing and 14 in two others.

deGrom has fared well against the Diamondbacks in four career outings, going 3-0 with a 1.63 ERA and 0.87 WHIP.

Arizona's Josh Rojas, who had two hits on Saturday and is batting .452 (14-of-31) during an eight-game hitting streak, is looking forward to hitting against deGrom.

"I'm excited. I like facing guys that have that status," said Rojas, who is 1-for-3 with two strikeouts against the Mets' ace. "They're supposed to be the best in the game. His numbers right now are unreal and we've all seen what he's been doing this year, but I think when you play this game, your goal is to take down the guy that's on top."

The Diamondbacks have lost five straight games, and in the eyes of manager Torey Lovullo, it's not just the opposing pitcher that is the hurdle.

Arizona has repeatedly placed runners on base while losing the first two games of the series, but is just 4 of 26 with runners in scoring position.

"Just an awkward-feeling game," Lovullo said of Saturday's setback. "I felt like we had some opportunities. We continue to put guys on base. I thought our approach was a little bit better. We had some quality at-bats with men in scoring position. We couldn't get that big slug, and that was really the difference in the game."

Diamondbacks right-hander Riley Smith (1-1, 4.91 ERA) will have the unenviable task of matching up against deGrom.

Smith, 26, has struck out 11 and walked eight in 22 innings. He has made 12 career appearances (three starts) and has never faced the Mets.

New York's Jeff McNeil hit a two-run homer in Saturday's victory, while offseason acquisition Francisco Lindor had two hits for the second straight game and stole his 100th career base.

The two players reportedly were involved in a dugout tunnel dispute during Friday's victory, but Lindor entered McNeil's postgame press conference on Saturday to give him a hug.

"It's fantastic playing with him," McNeil said of Lindor. "I hope to do so for a long time. He's going to be here for a little while."