Brewers' Brett Anderson to face D-backs, who drafted him long ago 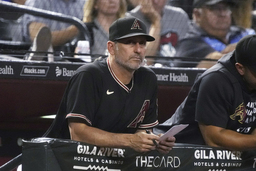 Brett Anderson will try to string together another solid performance when the Milwaukee Brewers open a three-game series against the Arizona Diamondbacks on Monday night in Phoenix.

The veteran left-hander is coming off seven shutout innings against the visiting Cincinnati Reds on June 15. He allowed just one hit and struck out nine with one walk in the 2-1 loss in 10 innings.

It was a welcome sight after Anderson lasted five innings just once in his six previous starts. That skid began when Anderson left with right knee discomfort after throwing just 10 pitches against the Chicago Cubs on April 23.

Anderson will be up against an Arizona team that has lost 17 straight games, but he says he isn't taking anything for granted at this point of his career.

"You don't want to be the weak link (in the starting rotation)," Anderson said. "Obviously, I'm the fifth starter by stuff and whatnot, but you still want to do your part and keep your team in ballgames and give them a chance to win."

The Diamondbacks may be feeling somewhat better after rallying from a 9-1 deficit against the visiting Los Angeles Dodgers on Sunday and forcing them to bring in closer Kenley Jansen after they scored six runs in the eighth to make it a one-run game.

Making things more difficult, the Diamondbacks lost catcher Carson Kelly to a fractured right wrist when he was hit with a pitch on Saturday night. Then third baseman Eduardo Escobar, who leads the team with 15 home runs and 45 RBIs, left on Sunday with right quad tightness.

The Diamondbacks recalled infielder Josh VanMeter from Triple-A Reno on Saturday and he went 0 for 4 with an RBI while batting in the leadoff spot on Sunday.

Arizona also recalled catcher Daulton Varsho, the organization's second-round pick in 2017 who has hit .178 in 57 games with the Diamondbacks over the past two seasons.

Anderson (2-4, 4.24 ERA) was originally drafted by the Diamondbacks in the second round in 2006, but never pitched for Arizona.

He was traded 18 months later along with five other prospects to the Oakland Athletics in a deal that brought over right-hander Dan Haren, who was a National League All-Star his first two seasons in Arizona.

Anderson has made seven career starts against the Diamondbacks since leaving Arizona, owning a 1-2 record and 4.38 ERA.

He faced them on June 3 and did not get a decision in the 7-4 win, surrendering three runs and eight hits in 4 1/3 innings while striking out one and walking one.

Merrill Kelly is scheduled to start for the Diamondbacks.

He pitched against the Brewers on June 5 and did not receive a decision. He allowed five runs (four earned) on six hits and a walk in six innings. He struck out four.

In that game, Arizona trailed 3-2 in the sixth when Willy Adames hit a two-run homer off Kelly. The Diamondbacks came back with three runs in the seventh to tie the score and take Kelly off the hook for another loss, but they eventually lost 7-5 to continue their current losing streak.

Kelly is 0-1 in three career starts overall against the Brewers with a 5.71 ERA.