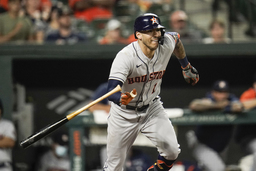 The Houston Astros came within five outs of a no-hitter and won their eighth consecutive game Monday night.

They might not find that much success Tuesday night in Baltimore, but the Astros at least would like to stretch their winning streak when they meet the Orioles again.

Jake Odorizzi threw five hitless innings before Cristian Javier added two more Monday. Baltimore finally broke through in the eighth when Maikel Franco hit a two-run homer to center off of Brandon Bielak but finished with only two hits and 15 strikeouts. The Astros rolled to a 10-2 victory.

The only thing that caused Odorizzi pause was when he received his first check to see if he had anything on his uniform that could give him an advantage, something that started across the majors on Monday.

"It was nothing," he told the Houston Chronicle. "It was basic. Here's my hat. Here's my glove. Here's my belt, and let's move forward. It's pretty easy when you have nothing on you."

Odorizzi and Javier kept the Orioles quiet with a lot of high strikes, and the young Baltimore offense simply did not show the discipline it needs, something Orioles manager Brandon Hyde noted after the game.

"We struggled offensively; it was a disappointing night offensively," Hyde said. "Credit to Odorizzi and Javier. It wasn't very fun. It was not a good night."

The Astros have had one of baseball's best offenses this season, and they showed more of the same in this game with 10 runs and 13 hits. Every starter -- manager Dusty Baker emptied the bench in the late innings -- posted at least one hit, and the Astros went 5-for-14 with runners in scoring position despite stranding 10.

Houston has won 12 of its past 14 games and has bashed the ball during the winning streak. They've scored 65 runs in their stretch of eight wins and have taken over first place in the American League West.

On the injury front, Baker said he expects outfielder Kyle Tucker (illness) to be activated later in the week.

For the Orioles, Jorge Lopez (2-8, 5.95) will start Tuesday in the middle game of this three-game set. The right-hander has an 0-1 record and a 23.14 ERA in one career appearance against the Astros.

Baltimore's recent struggles continued with Monday's loss. The Orioles have dropped 11 of their past 12 games due to problems on offense and pitching -- especially in the bullpen.

But the bullpen has been taxed because starters are not going long. Plus, after pitching well in the first month, the bullpen remains inconsistent.

Cesar Valdez began the season as the closer and registered eight saves but went on the 10-day injured list Monday due to a lower-back strain. He is 2-1, but his ERA has soared to 5.74.