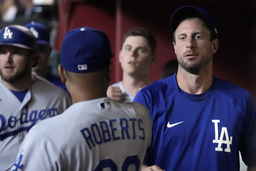 Showing their determination to repeat as World Series champions, the Los Angeles Dodgers will send their fourth Cy Young Award winner to the mound this season when they host the Houston Astros on Wednesday night.

Max Scherzer, acquired from the Washington Nationals last week along with infielder Trea Turner, is now on a team that already has had fellow Cy Young winners Clayton Kershaw, David Price and Trevor Bauer pitch this season. Bauer is on administrative leave following sexual assault allegations, and his time with the club appears to be in jeopardy.

Scherzer effectively takes over Bauer's role as a dependable right-hander who has the ability to dominate offenses. He also comes with World Series experience, having won a title with the Nationals in 2019.

"It's fun to join these guys because we have a great chance to win," Scherzer said Tuesday. "But it's gonna take a lot of work to get there. Nothing's assured yet."

Tuesday's game against the Astros showed just that. Houston, which won the 2017 World Series over the Dodgers under questionable circumstances, faced the wrath of Dodgers fans for the first time since their sign-stealing cheating scandal was exposed.

Fans booed, chanted and batted inflatable trash cans in the stands -- a nod to Houston's use of trash cans to convey stolen signs -- with more than one can finding its way to the field. On that field Tuesday, the Astros earned a 3-0 victory behind Lance McCullers Jr., who pitched into the seventh inning. Yordan Alvarez sealed the victory with a two-run home run in the eighth, his 20th homer of the season.

Scherzer (8-4, 2.76 ERA) will pitch for the first time since Thursday, when he held the Philadelphia Phillies to one run over six innings for the Nationals. It was a return to form after he gave up 11 runs over his previous two outings, both against the San Diego Padres.

"I'm glad I'm part of an organization that wants to win and has their sights set on doing that," Scherzer said. "That's what we play the game for."

The Astros will counter with right-hander Jake Odorizzi (4-5, 4.30), who has a tough act to follow after McCullers gave up four hits in 6 2/3 scoreless innings with three walks and nine strikeouts on Tuesday.

Odorizzi, who has never faced the Dodgers, was 2-2 in five July starts with a 4.62 ERA and is coming off a win against the Seattle Mariners last Wednesday, when he gave up three runs on five hits over 5 1/3 innings.

Facing the wrath of fans from opposing teams all season, the Astros still are 31-22 away from home. No American League team has more road victories.

"People started throwing stuff at Astros fans," Stanek said about the late innings. "For a few minutes you just sat there watching people throw full beers at people for a half an inning. It was kind of crazy. It was kind of a bonkers atmosphere to play in, for sure."

Astros first baseman Yuli Gurriel was a late scratch Tuesday because of neck stiffness, but Baker said he is optimistic he can play Wednesday.