Yankees set for another crack at clinching AL East vs. Jays 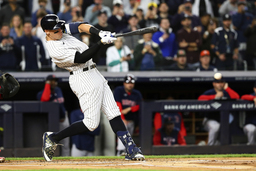 The visiting New York Yankees will have another chance to clinch the American League East title on Tuesday night in the middle game of their three-game series against the Toronto Blue Jays.

Yankees right fielder Aaron Judge also will have another chance to tie or pass the AL record of 61 home runs set by New York's Roger Maris in 1961.

Judge went 1-for-3 with two walks (one intentional) to stay at 60 home runs as the Yankees had their seven-game winning streak end with a 3-2, 10-inning loss to the Blue Jays in the series opener on Monday. The major leagues' homer leader has not gone deep in his past six games.

In the top of the 10th inning, the Yankees had two outs and runners on first and second when the Blue Jays intentionally walked Judge to load the bases. The strategy paid off when left-hander Tim Mayza entered and got left-handed-hitting Anthony Rizzo to ground out to end the threat.

"Game on the line, that's where you want to hit," Judge said. "That's why I'm doing all the work to put myself in the position to go out there and help the team out and help us get a win right there.

"But I trust every single guy in our lineup and every single guy on our bench, especially the guy behind me, Anthony Rizzo. Day in and day out throughout this whole season, he's always come up in big spots."

In the bottom of the 10th, Judge made a superb catch in right field on Bo Bichette for the second out. Vladimir Guerrero Jr., however, won the game with an RBI single.

The Blue Jays, who are trying to lock down the first AL wild-card spot, will send out right-hander Jose Berrios (11-6, 5.27 ERA) on Tuesday.

The second-place Blue Jays (87-67) trail the Yankees by 7 1/2 games in the AL East. A win by the Yankees on Tuesday would clinch the division.

The Blue Jays are going for the first wild-card spot that would give them home field for all games of a best-of-three, first-round playoff series. Toronto sits 2 1/2 games ahead of the Tampa Bay Rays (84-69) in that chase.

"We know what kind of an advantage we can have if we can get a series in Toronto," Blue Jays pitcher Ross Stripling said. "It would mean the world. It's going to be a spectacle for sure. It's definitely one of the motivating factors for us. We can't wait to see a packed house."

Toronto third baseman Matt Chapman added, "We have (eight) games left. Show up and prepare to win. At the end of the day, it's playoff baseball every day now. At this time of year, when you know you have an opportunity, that's all that matters -- seize the day and opportunity and just keep going."