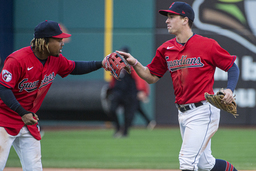 The Cleveland Guardians enter the postseason on quite the roll, winning 24 of their past 30 games to record the second-best 30-game, season-ending stretch in franchise history.

The American League Central champion Guardians (92-70) will look to continue their torrid run on Friday afternoon when they host the Tampa Bay Rays (86-76) in Game 1 of a best-of-three wild-card series. Tampa Bay, in turn, limps into the postseason with losses in nine of its past 11 games.

Guardians manager Terry Francona took a lighthearted approach when asked if the teams' recent schedules put Cleveland at a distinct advantage heading into the series.

"If they're out of underwear, yeah," Francona said. "Nobody wants to be out of underwear. You get to this point in the season and you kind of just play the game. I'm sure they would rather be on the road than not playing. We're happy to be playing. You just play and see who wins."

Cleveland, which won four of the six meetings against Tampa Bay in the regular season, will send right-hander Shane Bieber (13-8, 2.88 ERA) to the mound on Friday. He will be opposed by Tampa Bay left-hander Shane McClanahan (12-8, 2.54).

Bieber, like his team, finished the season with a flourish. The 2020 AL Cy Young Award recipient improved to 5-0 in his past six outings on Sunday after allowing one earned run in five innings of a 7-5 victory over the Kansas City Royals.

The lone misstep for Bieber in that stretch was a no-decision against the Rays on Sept. 27. He permitted four runs on six hits in six innings. Overall, Bieber is 2-2 with a 3.22 ERA in six career appearances (all starts) versus Tampa Bay.

Bieber, 27, struggled in his lone career playoff outing in 2020, yielding seven runs on nine hits -- including two homers -- in a wild-card loss to the New York Yankees.

Jose Ramirez led the Guardians in homers (29) and RBIs (126) this season. He had one and six, respectively, against the Rays.

McClanahan, 25, struggled in his lone career outing versus Cleveland, surrendering five runs on seven hits in 4 1/3 innings of a 5-3 setback on July 31.

McClanahan answered a pair of rough outings with a strong one on Saturday. He allowed two runs on five hits over five innings in a hard-luck 2-1 loss to the Houston Astros.

"Made some big pitches. I feel like I responded really, really well after those last two (outings) I had," McClanahan said after that start, per the Tampa Bay Times.

"To come back out fighting and kicking and competing in the zone and trust the guys behind me, it was good to see. I feel like I'm at a good finishing point this year, and I'm excited for whenever I get the ball next in the postseason."

That comes Friday, when the Rays look to right the ship after a pronounced stretch of porous play.