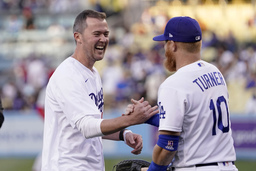 LOS ANGELES (AP) No team in the majors has hit the Los Angeles Dodgers this season as effectively as the Philadelphia Phillies did during back-to-back victories at Chavez Ravine.

And they didn't even let up after Justin Turner dramatically propelled the Dodgers into extra innings.

Nick Castellanos had a two-run double during the Phillies' three-run 10th inning, and Philadelphia battered the slumping Dodgers' pitching staff for the second straight game in a 12-10 victory Friday night.

Bryce Harper hit a tiebreaking RBI double in the sixth and a solo homer in the eighth for the Phillies, who have 27 hits and 21 runs in their first two games against the NL's top staff by ERA. It's a tremendously encouraging development for a team that sat in the middle of the major league pack offensively until the past week on the West Coast.

"We know they're really good," said manager Joe Girardi, whose team has 38 runs in the last five games, all on the road. "Their staff is fantastic. Our guys are just grinding out at-bats, and they've done a really good job. We think we have a pretty good offense, and at times we struggled this year, but we've seemed to get it going on this road trip. ... We know that we have a bunch of gifted hitters. We feel that."

Turner hit a tying two-run homer in the ninth and drove in four runs for the Dodgers, but they have lost three straight for the first time since July 21-23, 2021, because they couldn't cool the Phils' bats.

When asked why the Phillies are teeing off against Los Angeles, Castellanos admitted he has no idea. He was more impressed by his team's poise after blowing a late two-run lead.

"That's what we've been doing really well for the past few games," Castellanos said. "I don't know if getting to know each other better is a part of it, but it's fun."

Los Angeles rallied to force extra innings against Jeurys Familia (1-0). Trea Turner got a leadoff single in the ninth, and Justin Turner blasted a one-out splitter into the left field bleachers.

In the 10th, Philadelphia mounted a rally off Brusdar Graterol (0-2) highlighted by Castellanos' double to left. Castellanos also stole third and scored on a throwing error.

The Dodgers then loaded the bases with nobody out against Francisco Morales, a 22-year-old right-hander making his second big league appearance. Morales walked three, but also got Mookie Betts to ground into a double play before Freddie Freeman was forced out at second on Trea Turner's grounder.

"We knew that we were going to have some guys that really needed to step up tonight, and a lot of guys did," Girardi said. "It's a huge ask (for Morales)."

Chris Taylor homered for the Dodgers, but they dropped back into a first-place tie with San Diego atop the NL West with San Francisco a half-game behind. Taylor flied out to the warning track to end the ninth.

The Dodgers gave up at least six runs for the second straight game after allowing that many runs just once in their first 29 games.

"We just didn't pitch well, but it's not who we are," Dodgers manager Dave Roberts said. "I haven't seen it in my time here, but it's one we've got to wash off. ... It is good to see our guys fight back and keep putting up runs and make it a game and get deep into their 'pen."

Walker Buehler struggled after abruptly moving up his scheduled start from Saturday to replace Clayton Kershaw, who went on the injured list Friday morning. While yielding five runs over five innings, Buehler gave up nine hits - his most allowed in 72 appearances since July 3, 2019.

"We weren't very effective today on that side of the ball," Dodgers catcher Austin Barnes said. "They're aggressive. They have good hitters in their lineup. We just didn't do enough. We put ourselves in bad counts and had to come after hitters."

Kyle Gibson gave up eight hits and six runs while failing to get out of the fourth inning for the Phillies. His bullpen was sharp until Familia had to step in with closer Corey Knebel unavailable because he pitched the past two days.

Harper had three hits in his second straight monster game as a designated hitter since the Phillies revealed Thursday that he has a partially torn elbow ligament and won't throw for a month. The two-time NL MVP went 2 for 4 with a homer and three RBIs on Thursday.

Dodgers: Kershaw has back pain from an inflamed pelvic joint. He had an epidural pain-relieving injection and won't throw for a few days, but Roberts is optimistic his veteran left-hander will return in a couple of weeks.

Julio Urias (2-2, 2.10 ERA) moves up to start the third game of the series for the Dodgers, albeit on regular rest. He faces Philadelphia's Ranger Suarez (3-1, 3.68 ERA), who pitched six scoreless innings in his last start.