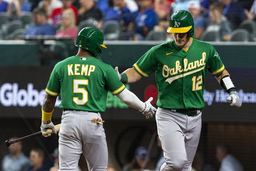 ARLINGTON, Texas (AP) Kyle Gibson couldn't really get comfortable on the mound, and that had nothing to do with new mandatory checks by umpires looking for foreign substances.

"I've only used rosin pitching my whole life. So they said, 'Hey, nothing looks sticky here, let's move on," said Gibson, who pitched into the sixth inning to help the Rangers end another losing streak.

Andy Ibanez and Jose Trevino hit three-run homers to back Gibson as the Rangers snapped a six-game losing streak with an 8-3 win over the Oakland Athletics and Elvis Andrus in the shortstop's return to Texas for the first time since getting traded. It was the fourth time this season the veteran right-hander started a win that ended a losing streak of at least three games for his team.

Ibanez hit his first major league homer as part of a five-run first against Frankie Montas (7-7). The 28-year-old Cuban infielder made his big league debut last month and was recalled Monday after four homers his last nine games at Triple-A Round Rock.

Trevino hit a 420-foot drive to straightaway center for an 8-2 lead in the sixth, one batter before Montas was pulled.

"Playing with a five-run lead right from he beginning kind of puts everybody at ease a little bit. And you have your best guy on the mound," manager Chris Woodward said. "That probably wasn't obviously Gibby's best start, but he still found a way to to get us into the sixth inning."

Andrus got a nice ovation when he came to bat in the second inning. It kept getting louder, and he eventually stepped out of the batter's box with a smile on his face and tipped his helmet to the crowd.

"No surprise that he got the type of reception that he did. Monday night, good crowd, probably a lot had to do with Elvis coming back to town and playing. I think we all got a little choked up too," A's manager Bob Melvin said. "He's meant so much to this city and this team and been with them so long."

Many in the announced crowd of 20,259 got Andrus bobbleheads when entering the building. Those were initially part of planned giveaways last year that never happened since the Rangers played the 2020 season without fans in their new ballpark because of the coronavirus pandemic.

Andrus was traded just before spring training after deciding last offseason that Isiah-Kiner Falefa would move to shortstop after winning a Gold Glove at third base last season. Andrus was the longest-tenured player in Texas, the starting shortstop for 12 seasons and lone player remaining from the franchise's only World Series appearances in 2010 and 2011.

Andrus, hitting .220 after going 0 for 4, reached on an error by Kiner-Falefa in the eighth but was promptly retired when Sean Murphy hit a liner right at first baseman Nate Lowe, who turned and tagged out Andrus for a double play.

Gibson (5-0, 2.17 ERA) struck out three and walked three giving up two runs over 5 1/3 innings. The right-hander has made 15 consecutive starts without a losing decision, though that streak includes his first career opening day start, when the Rangers had its only other five-run first this season. Gibson then gave up five runs while recording only one out in the bottom of the first at Kansas City.

Since that opener, Gibson has given up more than two runs in a start only once.

The A's had a couple of two-out walks before getting a hit off Gibson, on Murphy's one-out solo homer in the fifth. Matt Olson and Ramon Laureano had back-to-back doubles to open the sixth.

Montas struck out six, but gave up eight runs and nine hits in 5 2/3 innings.

"It was really humid, I got sweat all on my palms," Montas said. "That made the ball slippery."

Murphy has eight homers overall, three in the last six games. ... Texas had at least multiple homers driving in at least three runs in the game game for only the third time since the start of the 2019 season.

The Rangers got outfielder/designated hitter Khris Davis and switch-hitting catcher Jonah Heim from the A's in the Andrus deal. Davis is now a free agent after being designated for assignment June 8. He hit .157 with two homers and five RBIs in 22 games after missing the first 34 games of the season with a left quad strain. Heim has started 28 games.

The Rangers said afterward that Taylor Hearn (2-1, 2.84) would start Tuesday instead of Jordan Lyles (2-5, 5.68 ERA), who gave up four home runs over 4 1/3 innings in his last start. The Rangers haven't won consecutive games since sweeping three games against Houston from May 21-23. Lefty Cole Irvin (4-7, 3.89) is on the mound for Oakland.