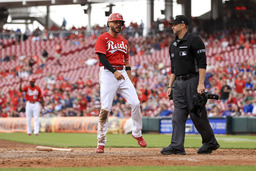 CINCINNATI (AP) After getting a cortisone shot and a few days off, Kyle Farmer helped power the Cincinnati Reds to their highest-scoring game in 23 years.

Farmer homered twice, had four hits and tied his career high with five RBIs in a 20-5 rout of the Chicago Cubs on Thursday.

"I was hurting pretty bad in Toronto, but I'm just glad it's gone now," said Farmer, who had missed four games. "Had to take some time off, get a shot and have some rest and recovery."

Cincinnati trailed 3-0 before scoring twice in the second and bursting ahead with eight runs in the third.

Hunter Greene (2-6) won for the first time since his major league debut on April 10 despite giving up five runs, seven hits and two walks in five innings. He had been 0-6 with a 5.50 ERA in his previous seven starts.

"Steele was just behind in the count," Cubs manager David Ross said. "There were a lot of three-ball counts in that one inning. They hit some pretty good pitches. He seems to have that one inning where he loses command a little bit. Sometimes he locks it back in. Sometimes he's not able to."

Farmer, who came in with just one home run this season, hit a two-run homer in the second inning and a solo shot in fifth for his first career multihomer game, and then added a two-run single in the sixth.

His sacrifice bunt was the only out among the Reds'first 10 batters in the third, who combined for four singles, three walks, a double and a triple

"He wants to be out there every day," Reds manager David Bell said. "That position is a real grind, and he's so important to our team. He puts a lot on himself. So getting the break, getting a few days off, he came back out today and was definitely energized."

Reynolds hit a two-run triple, and Tyler Stephenson and Almora had two-run singles in the third.

The game was delayed by rain for 59 minutes at the end of the fifth.

Contreras flipped his bat and walked slowly to first following his no-doubt homer off Greene. When Contreras came to the plate to leading off the seventh, Joel Kuhnel plunked hit him on a shoulder with the first pitch, a 95.4 mph offering. Contreras grumbled and Ross came out to complain to umpires. The Cubs manager was ejected from Wednesday night's game after some high and tight pitches caused tempers to flare on both sides. Joey Votto and Cubs reliever Rowan Wick -- who had jawed at each other Wednesday night -- had words again after Wick struck out Votto in the seventh.

Cubs: RF Seiya Suzuki left after injuring his left ring finger during an awkward slide in the third inning. Ross said he should be OK ... INF Nick Madrigal will start a rehab assignment on Saturday at Iowa. He has been out with back tightness. ... LHP Alec Mills is scheduled to pitch three innings on a rehab assignment on Friday, about 55 pitches. Mills is on the 60-day IL and not eligible to come off until June 8

Reds: SS Jose Barrero (wrist surgery) is going to stay at Triple-A Louisville for the time being. "He could come back at any point but we're not going to rush that," manager David Bell said.

Cubs: Opens a two-game series at the Chicago White Sox following an off day Friday. Right-hander Johnny Cueto (0-0), who was signed to a minor league earlier this month, is slated to make his third start for the White Sox. The Cubs haven't said who'll start yet.

Reds: Open a three-game set at home with the San Francisco Giants on Friday night. LHP Carlos Rodon (4-3) is the scheduled starter for the Giants against a Reds pitcher who's still to be determined.