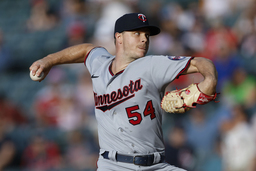 CLEVELAND (AP) Sonny Gray turned an emotional, distracting day for the Twins into a dominant one.

The right-hander pitched seven superb innings and Gary Sanchez homered and drove in four runs to help Minnesota stretch its lead in the AL Central with an 11-1 blowout of the Cleveland Guardians on Monday night.

When they arrived in Cleveland on Sunday night ahead of the five-game series, the first-place Twins were rocked by news that pitching coach Wes Johnson is leaving to take over at LSU.

"I'm happy for him. I really am," manager Rocco Baldelli said before the game. "This is the best move for Wes. I love him and I love everything that he's done for this organization. We're all going to miss him."

The decision was felt throughout Minnesota's clubhouse, but especially among the team's pitchers.

Gray, acquired in March from Cincinnati, had grown close to Johnson and said he doesn't want him to go.

"It's a tough one," said the right-hander, who allowed just three singles Monday night. "It's someone who I became really close with and I think if you know me at all, letting people in and getting into relationships in that respect, I put my guard up a lot.

Sanchez hit a three-run homer in the second inning off Triston McKenzie (4-6), sending the first-place Twins on their way to an easy win. Nick Gordon and Carlos Correa added two-run homers for Minnesota, now three games up on Cleveland.

The Guardians had briefly moved atop the division last week after rallying to win two of three in Minneapolis, but they've lost five straight. These rivals will play a day-night doubleheader Tuesday and are meeting eight times in 10 days before not seeing each other again until September.

"It was really nice to come away with the first one," Gray said. "We got four more of these things in the next three days, so it's going to be hopefully a good three days for us."

Gray (4-1) never let the Guardians get going. He gave up hits in each of the first two innings, then retired 15 of 16 before walking Jose Ramirez to start the seventh - his first walk allowed in 22 innings.

"He's really good," Guardians manager Terry Francona said. "Now that he's starting to get lengthened out where he's not on a pitch count, he can go pitch. He changes speeds. He locates. He's good. He's really good."

Gray got a no-decision last week against the Guardians. He changed his game plan this time around.

"Attacking guys, coming at guys," he said. "My last game I might have tried to strike these guys out a little too much. Throughout their lineup, they have good bat-to-ball skills and they're not a team where you're just going to come in and punch out 10."

McKenzie has been hurt by leaving pitches up in the strike zone - the right-hander has given up 16 homers in 80 1/3 innings, including three homers in 4 1/3 innings last week against the Twins.

McKenzie hit Alex Kiriloff with one out and gave up a double to Gio Urshela before Sanchez pulled a 1-0 pitch into the left-field bleachers for his ninth homer.

The Twins added two more runs in the fourth on Urshela's RBI double and a run-scoring single from Sanchez.

Gordon pushed Minnesota's lead to 7-0 in the sixth with his third homer, and Correa's eighth made it 9-0 in the seventh.

"We kept adding on," Gray said. "That's what good teams do."

The Guardians have another new boss.

Owner Paul Dolan's search for a minority investor ended with the team announcing that billionaire businessman David Blitzer has agreed to purchase a 25% stake in the franchise. Blitzer has partial ownership in the Philadelphia 76ers and New Jersey Devils. He's expected to eventually take majority ownership with Cleveland.

"Personally, I'm happy for Paul," Francona said. "It seems like a pretty big weight that he now has somebody to help him here, which I think is great."

Twins: 2B Jorge Polanco (lower back tightness) may not be activated until later this week because of experiencing some soreness over the weekend. He took swings before Monday's game.

Guardians: C Austin Hedges remained out of the lineup. Francona said the 29-year-old is a "little nicked up" but did not provide any details of an injury.

The Twins will start Devin Smeltzer in Game 1 on Tuesday against Zach Plesac. Minnesota is recalling rookie Josh Winder to start the second game against Cleveland rookie Konnor Pilkington.