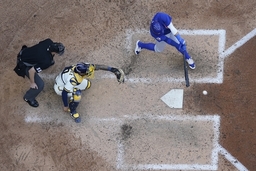 MILWAUKEE (AP) P.J. Higgins has learned how to stay ready when he isn't getting consistent playing time.

The Cubs' backup catcher and first baseman delivered a tiebreaking two-out double off three-time All-Star Josh Hader in Chicago's 2-1 victory over the Milwaukee Brewers on Wednesday.

"I've just got to mentally prepare myself, do what I need to do in the cage and just kind of prepare myself that way versus playing every day," Higgins said. "That's my role. I've accepted it. I'm all about it."

Chicago took two of three at Milwaukee as the Cubs continue recovering from their June swoon.

The Cubs lost 10 straight games last month to fall to 23-40, but they've gone 11-8 since and have won each of their last four series.

After Brewers starter Corbin Burnes threw seven shutout innings, the Cubs broke through against Milwaukee's bullpen by scoring in each of the last two frames.

"We've played a lot of close games, played a lot of extra-inning games that didn't go our way sometimes, but we constantly battle," Higgins said. "I think that's just kind of our demeanor and that's kind of our mindset. We're always in games. We have to scratch and fight to the very end and hopefully come out on top."

Patrick Wisdom led off the ninth by walking on four straight pitches and stole second one out later. Higgins brought home Wisdom by sending Hader's 1-1 slider just inside the right-field line.

"Probably the execution of it was bad," Hader said. "It was just up in the zone. (He was) able to get the barrel to it."

"For Josh, the leadoff walk on four pitches is rare for him," Brewers manager Craig Counsell said. "There's going to be walks, but a four-pitch walk is a rare at-bat for him. That was really the only strange thing that happened for me in that inning. Everything else was pretty good."

David Robertson retired the side in order amid chants of "Let's go, Cubbies" from the large contingent of Chicago fans at American Family Field to earn his 12th save in 16 opportunities.

Keston Hiura homered for the Brewers and made a superb catch in left field, where he made a rare start.

The Cubs' comeback began when Christopher Morel hit a one-out triple to right-center off Brad Boxberger in the eighth. Morel's drive went just over the glove of center fielder Jonathan Davis, hit the yellow line at the top of the wall and caromed back into play.

"I thought I was going to catch it but on the way up, I caught the wall," Davis said. "And at that point, my momentum was shot so I couldn't reach the ball."

The Brewers wasted an opportunity to regain the lead in the bottom of the inning.

Davis hit a leadoff single, advanced to second on Mychal Givens' wild pickoff attempt and moved to third when Christian Yelich grounded out. After Willy Adames popped out, Givens (5-0) intentionally walked Rowdy Tellez and struck out Luis Urias to end the threat.

Until the Cubs rallied, the story of the game had been two remarkable fifth-inning plays by Hiura.

He crashed into the wall in left-center while making a catch to rob Higgins of an extra-base hit that would have driven in Alfonso Rivas from second. Normally an infielder, Hiura was making just his second career start and fourth appearance in left field.

With two outs in the bottom of the fifth, Hiura connected on a 3-2 sinker from Adrian Sampson and sent it 440 feet, well beyond the wall in left-center field for his eighth homer.

Sampson struck out five, walked none and allowed four hits and one run in 5 2/3 innings.

Burnes was even better, striking out 10 and allowing three hits and one walk. The reigning NL Cy Young Award winner has 18 career games with at least 10 strikeouts, tying Yovani Gallardo for the most in Brewers history.

Cubs C Willson Contreras was out of the starting lineup for a second straight day due to hamstring tightness.

Brewers: Begin a three-game home series with the Pittsburgh Pirates on Friday with LHP Aaron Ashby (1-6, 4.60) on the mound.