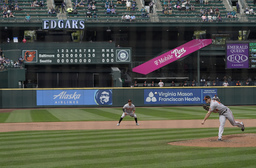 The Baltimore Orioles already had the feel-good story of the season with the return of Trey Mancini from colon cancer surgery. For more than a month, the youngsters at the core of their rebuild have - perhaps surprisingly so - played well enough to hang around the .500 mark in the AL East.

And if they needed additional proof they have an ace on their pitching staff, John Means provided it on Wednesday. Throwing the first individual no-hitter by an Orioles pitcher in more than 50 years is plenty of affirmation.

"That's the feeling you're getting with John right now is, you go to the ballpark (John's) on the mound, it's going to be a fun night," Baltimore manager Brandon Hyde said. "That's what you feel like when you have a number one or a top of the rotation guy on the mound is when you get to the ballpark we got a really good chance to win this game."

Means more than just improved to 4-0 on Wednesday. He etched himself in Orioles lore throwing the first individual no-hitter by a Baltimore pitcher in 52 years in a 6-0 win over the Seattle Mariners.

Early in a season that's already been filled with several positives, this was another boost in efforts for Baltimore returning to prominence.

"I think we have a really good team and it's about time people started to pay attention," Means said.

Means was brilliant on the mound. His fastball was overpowering as it sat in the mid 90s and spotted on the edges. His changeup left batters flailing. He struck out 12, threw 26 first-pitch strikes and rarely found himself in a three-ball count.

Mix in a Seattle lineup that collectively was struggling at the plate, and it was a perfect recipe for a bit of history.

The Orioles had a combined no-hitter in 1991, but Means was the first individual to finish a no-no since Hall of Famer Jim Palmer in 1969. Means understood how special it is to be a pitcher in Baltimore and mentioned in the same breath as Palmer.

"I can't put it into words. It's just it's such a crazy feeling. It's such a whirlwind of an experience," Means said.

The only blemish that stood between Means and a perfect game was a breaking pitch in the dirt that struck out Sam Haggerty swinging but skipped past catcher Pedro Severino. It happened in the third inning, but even that early in his outing, Means was showing he had the stuff capable of something special.

"He was awesome today," Seattle's Kyle Seager said. "He was ahead of us all day. We were behind pretty much every single count."

Means showed two years ago he had the potential to be an emerging breakout star for the Orioles when he went 12-11 with a 3.60 ERA, was an All-Star selection and finished second in the AL Rookie of the Year voting.

Last season, Means started poorly but his final four starts were a precursor to what he's done this season. In his final four outings of 2020, Means only went 2-2, but had a 1.52 ERA and opponents hit just .146 against him.

And his start to 2021 couldn't be much better. Means has thrown at least six innings in five of his seven starts. He's allowed just seven earned runs in 46 innings and opponents are hitting a meager .135.

He's an ace, whether the Orioles want to give him that official title or not.

"You don't want to label somebody. I don't want to raise expectations of who he is, but he is definitely pitching like one there's no doubt about that," Hyde said. "He has pitched like one from September on from last year, through this year.

"For me aces, not only give you a chance to win the game but they go long. They can battle throughout a game, and they give bullpens a rest, and they make big pitches in big spots late in the game, and you kind of have a longer leash because of that. John Means is at that point for me."