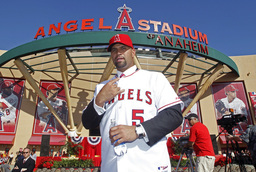 The Angels surprisingly announced the move to designate Pujols for assignment one day after he wasn't in the lineup for the slumping club's fourth consecutive loss. The decision was made after Pujols, dissatisfied with irregular playing time, had a late-night meeting with general manager Perry Minasian and team president John Carpino.

Pujols, who is batting .198 this season, is determined to play first base regularly for another team after he clears waivers, Angels manager Joe Maddon said. Pujols is fifth in major league history with 667 career homers and 13th with 3,253 hits.

"He wants to play, and he wants to be in the field," Maddon said. "Hopefully he's going to get that opportunity somewhere else, and believe me, we're all going to be rooting for him."

The three-time NL MVP for St. Louis was in the final season of a 10-year, $240 million contract with Los Angeles, but Pujols' determination was incompatible with the Angels' desire to make everyday players out of first baseman Jared Walsh and designated hitter Shohei Ohtani, who have both significantly outperformed Pujols as two of the American League's top hitters.

"Albert is not a bench player," said Minasian, the club's first-year GM. "Him being on the bench would not do him any good, and would not do the team any good. He's as motivated as he's ever been. If the situation was different and there were at-bats for him to play here, it would be different."

A 10-time All-Star and the oldest active player in the majors, Pujols had five homers and 12 RBIs this year while playing in 24 of the Angels' 29 games. After a decent start to the season, Pujols had been in a 7-for-43 slump since April 20, hitting three homers in that stretch.

Minasian said the decision to cut ties with Pujols was "really difficult. These are never easy, especially with a guy like this who loves the game as much as anybody I've ever met, who works as hard as anybody I've ever met. But since I've taken this job, to me it's about what's best for the organization moving forward. It really weighed on me. I think it weighed on all of us."

Pujols joined the Angels after 11 successful seasons with the Cardinals during which he won three league MVP awards, earned two World Series rings, received nine All-Star selections, won an NL batting title and hit 445 homers while establishing himself as one of the greatest sluggers of his generation.

Angels owner Arte Moreno persuaded Pujols to leave for the West Coast with a lavish contract, but the Angels have not won a playoff game during the concurrent tenures of Pujols and three-time AL MVP Mike Trout at the heart of their lineup.

And though Pujols has crossed several statistical milestones with the Angels, the contrast in the two halves of his career is stark.

The Angels made only one postseason appearance in Pujols' nine full seasons, winning the AL West title and promptly getting swept by Kansas City in 2014. The club is on skids of five straight losing seasons and six straight non-playoff campaigns since then.

Pujols' achievements with Los Angeles have been mostly numerical, including the 500th and 600th homers and the 3,000th hit of his career. Willie Mays, Hank Aaron, Alex Rodriguez and Pujols are the only players in major league history with 3,000 hits and 600 homers.

"He's had a ton of historic milestones here as an Angel over the last 10 seasons, many that our fans really cherish," said Carpino, who hopes the franchise will be able to honor Pujols with a more appropriate farewell in the future. "All we have from Albert is positive memories from his time here."

But Pujols has been a below-average statistical player for the past half-decade, during which he is batting .240 with minus-2 wins above replacement. His career average even dipped under .300 last season for the first time in his two decades in the majors.

Pujols hasn't performed at a level commensurate with his pay for many years, although Moreno knew the near-certain consequences of such a long contract - and baseball's salary structure all but guarantees a great player will be grossly underpaid for the first half of his career and effectively overpaid for the rest.

Pujols is making $30 million this season in the final year of his contract, which includes a 10-year personal services contract with the Angels after his retirement. Carpino didn't indicate any changes in the status of that portion of the agreement reached in late 2011.

Despite his age and declining production, Pujols said he wasn't ready to decide whether this season would be his last when he reported to spring training in February. Maddon acknowledged early on that Pujols' playing time could decline behind Ohtani and Walsh, two of Los Angeles' top hitters alongside Trout, Anthony Rendon and Justin Upton.

Pujols still was in the opening day lineup for the 21st consecutive season, joining Pete Rose and Eddie Murray as the only major leaguers to reach that milestone.

But Walsh has been even better than the Angels expected since he started getting consistent playing time last year, while Ohtani has increased his workload sharply this season, no longer taking days off from his hitting duties around his pitching starts. Walsh's .333 batting average and .988 OPS are both seventh in the AL, while Ohtani is second in the league with nine homers and eighth with 22 RBIs.

That combination of developments left little playing time for Pujols in the long term, although he had been still playing fairly regularly because an injury to right fielder Dexter Fowler had forced the Halos to play Walsh in the outfield.

"He came to the ballpark with the same zeal on a daily basis," Maddon said of Pujols. "The guy wants to be on the field. Doesn't want to be on the bench of any kind. There will be a void, but this is an opportunity to grow, and that's how the world works."

Pujols is second in major league history with 2,112 RBIs since they became an official statistic, trailing only Aaron. He is fifth in doubles (669), total bases (5,955) and extra-base hits (1,352) in major league annals. His doubles are the most ever by a right-handed hitter.

Moreno is no stranger to handing out lavish contracts to midcareer stars in transactions that eventually hamstrung his franchise and its series of inexperienced general managers.

A year after signing Pujols, Moreno gave a five-year, $125 million deal to troubled slugger Josh Hamilton, only to trade him back to Texas two years later while eating most of the $80 million still owed to Hamilton. Moreno also gave a five-year, $50 million contract in 2007 to Gary Matthews Jr., who batted .248 with 30 homers in three seasons for Los Angeles.

If another team picks up Pujols after he clears waivers, the Angels still would owe him the rest of his $30 million, minus a prorated portion of likely the major league minimum salary.