'I have a plan': Cuban Adolis García on a roll for Rangers 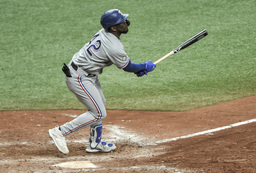 ARLINGTON, Texas (AP) Adolis Garcia repeatedly pounded his chest with his right hand while bouncing around the bases after becoming the only Texas Rangers player whose first career homer was a go-ahead shot in extra innings.

The 28-year-old Cuban rookie outfielder had a similar reaction in the field a few games later after jumping at the wall in deep center with his glove extended to take away a potential homer from a surprised Shohei Ohtani, who had tossed his bat aside after crushing the ball.

"He's not a 20-year-old phenom coming up here," Rangers manager Chris Woodward said. "He's been around a little bit and he's getting a chance to play. And I think that this is the first time he's been given the opportunity to kind of get out there every day and see what he can do."

With bulging biceps and his passionate approach, Garcia has put on quite a show since getting called up April 13. His nine homers and 26 RBIs are the most in the majors during that stretch, and the expanding highlight reel of impressive long balls for the player nicknamed "El Bombi" also includes several defensive gems.

Before homering and driving in five runs on Mother's Day, Garcia also went deep with a late, game-tying drive the previous night in a one-run victory over Seattle. That game ended on his impressive throw, and a nice pick by catcher Jonah Heim, for the final out at the plate that set off a celebration.

"I have a plan and I'm always content with the plan that I'm following," Garcia said through a translator. "I just happen to be in those situations and I just prepare like you would in any other situations. But I've been very blessed and thankful that the outcomes have been really good."

Garcia, whose older brother Adonis played 224 games as a third baseman and left fielder for the Atlanta Braves from 2015-17, said his love for the game is the source of the passion he displays on the field.

After being MVP for Serie Nacional, Cuba's top professional league, in 2015 (.319 batting average, 14 homers, league-best 71 RBIs in 85 games), Adolis Garcia was allowed by the Cuban government to play in Japan in 2016. But he never went home after four games for the Yomiuri Giants, instead defecting and eventually signing as a minor league free agent with the St. Louis Cardinals in 2017.

The Rangers acquired Garcia for cash considerations in December 2019 after he was removed from the Cardinals roster. He spent most of last year at Texas' alternate training site, and struck out in four of his six big-league at-bats during the pandemic-altered season. His MLB debut and only action with St. Louis came in 2018, when he had two hits and seven strikeouts in 17 at-bats.

Garcia went to spring training with the Rangers as a non-roster invitee this year after he ad cleared outright waivers when they designated him for assignment to make room for right-hander Mike Folytnewicz. Garcia was left off the opening day roster even after hitting .375 with three homers, 13 RBIs and four stolen bases in 22 spring games.

Woodward said Garcia never showed any frustration, continued to work like he had last summer and was ready when he got his opportunity. The callup came after first baseman/outfielder Ronald Guzman suffered a season-ending knee injury, and Garcia quickly evolved into an everyday player hitting in the middle of the lineup because of his production and the ongoing struggles for rookie outfielders Leody Taveras and Eli White.

The first three homers by Garcia, including that game-winner in the 10th inning at Tampa Bay, put the Rangers in the lead. The right-handed slugger later had another 10th-inning homer in Minnesota, and the first time he went deep in Texas' home park was leading off the eighth to tie Saturday night's game. He has five homers off lefties, four off right-handers.

"We saw flashes of it in spring for sure, when he's getting some late inning at-bats against guys throwing 150 miles an hour without a clue where it's going, and see him wind up on the barrel over and over and over again. His bat-to-ball skill is through the roof," Texas first baseman Nate Lowe said. "He's fun to play with. He's a good teammate, is a hard worker, and obviously looks great in a uniform."