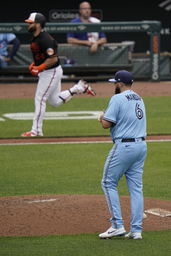 Manoah appealed the discipline and the suspension will be delayed until after the appeals process.

Blue Jays manager Charlie Montoyo was suspended for one game for Manaoh's actions and served it by missing Tuesday night's game at the Miami Marlins.

Manoah, making his fifth major league start, gave up consecutive homers to Ryan Mountcastle and DJ Stewart in a five-pitch span of the fourth inning at Camden Yards last Saturday, his third and fourth homers allowed in the game. The highly touted 23-year-old then hit Franco on the left shoulder with his next pitch, a 93.8 mph offering.

Franco yelled at Manoah, the pitcher took several steps toward the plate and held out both arms, and the dugouts and bullpens emptied for several minutes of shoving. Manoah was ejected.

Toronto rallied with six runs in the ninth inning to win 10-7.