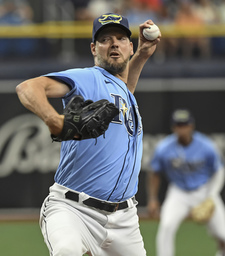 "I think a lot of people in the game know the name - guy that's been around, pitching good baseball, pitching playoff baseball," Mets manager Luis Rojas said. "It's a great fit, great acquisition. Our front office is being diligent. One of the needs we've talked about is our starting pitching need and this is a guy that fits right in."

New York started the day with a four-game division lead over Philadelphia and Atlanta despite a banged-up rotation. Ace Jacob deGrom and starter David Peterson are on the injured list. Starters Noah Syndergaard and Carlos Carrasco haven't pitched this year while recovering from injuries.

Rojas said he didn't know yet when Hill could slot into the Mets' rotation. New York does not have scheduled starters yet for Sunday's series finale against the Toronto Blue Jays nor Monday's doubleheader against the Atlanta Braves.

Hill has pitched just 95 1/3 innings this year under limits imposed under the Rays' pitching strategy. This will be his 11th big league team in a 17-season career.

The NL East leaders made the deal on the day Hill was supposed to start at Cleveland, and a week before the trade deadline. New York assumed $967,742 remaining in Hill's $2.5 million salary.

This was the second trade by the Rays in two days. They acquired Nelson Cruz from the Minnesota Twins on Thursday, taking on $5,102,151 left in the All-Star slugger's $13 million salary.

Tampa Bay began the day one game behind Boston in the AL East.

Rays general manager Erik Neander said "there was a numbers element" to trading Hill, primarily to make room in the rotation for 21-year-old Luis Patino and the impending arrival of former All-Star Chris Archer.

Archer, who signed a $6.5 million, one-year contract on Feb. 9, is on a rehab assignment with Triple-A Durham while recovering from right forearm tightness.

"There is a commitment to Chris, as long as he fulfills his side, to be here in August," Neander said. "We think the world of Rich, but this gives us the chance to balance our lineup."

The 35-year-old Hunter appeared in four games with one start for the Mets this year. He threw eight scoreless innings, allowing four hits, three walks and striking out six. He was placed on the 10-day injured list on May 21 and transferred to the 60-day IL on June 11 with lower back pain.

Dyer, 23, was selected by the Mets in the fourth round of the 2020 amateur draft out of the University of Arizona. He has appeared in 36 games for the Low-A St. Lucie Mets this season, hitting .194 with 20 runs, seven home runs and 20 RBIs.