Astros, Mariners pull off odd trade while facing one another 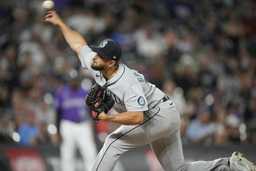 SEATTLE (AP) The Houston Astros have landed one of the top relievers in baseball, acquiring right-hander Kendall Graveman from the Seattle Mariners on Tuesday in an odd intra-division trade while the teams were preparing to play each other.

Graveman and Rafael Montero are going to the AL West-leading Astros with infielder Abraham Toro and reliever Joe Smith going back to Seattle.

A teary Graveman said he was shocked by the trade, and had assumed he would be sticking with the Mariners, who'd won four straight against divisional opponents in gritty fashion.

"I didn't see it coming, but there's always that percent of, `This game's a business,'" Graveman said as he stood in front of the Astros dugout. "I'm speaking truth and honest, the way I felt is, (we're) nine games over .500 over on that side and playing pretty good ball while I was there. That takes away from the last five days, honestly, I think. But we'll see if they bounce back."

The move bolsters a Houston bullpen that has struggled at times and has an ERA above 4.00 this season.

"We are always looking to improve all aspects of the roster," Astros general manager James Click said. "This one happens to be focused on the bullpen. But we're not going to take any options off the table when it comes to trying to put ourselves in a position to compete for a World Series."

Graveman is 4-0 with a 0.82 ERA and 10 saves in 30 appearances this year. He missed nearly a month due to COVID-19 protocols in May and June, but has been dominant on the mound. Graveman has not allowed an earned run in his past 12 appearances.

On the surface it appears a baffling decision by Seattle to give up its most dominant reliever while failing to fill a position of need with the Mariners just one game behind Oakland in the AL wild-card race - the Astros lead the A's by five games.

Graveman said his former teammates took news of the trade hard and there was immediate confusion among players, fans and observers about Mariners general manager Jerry Dipoto's move.

The first question to Dipoto in his post-trade news conference: How does this trade make sense to the Mariners?

"It probably doesn't as a standalone, but it's part of a context that's going to be an ongoing story over the next couple of days" as the trade deadline nears, Dipoto said.

"What comes next could be as early as tonight or tomorrow because we do plan on being active," he added.

Houston manager Dusty Baker said for now he views Ryan Pressly as his closer, but wouldn't hesitate turning to Graveman.

"In modern times it seems like most teams are trading to try to win the deal, but this is a trade that is going to benefit both," Baker said.

Montero was designated for assignment by the Mariners last week after being acquired in the offseason from Texas. Smith has a career-worst 7.48 ERA in 27 games for the Astros after not pitching during the 2020 season.

Toro learned of the trade in the middle of his round in the batting cage.

"And I just walked right over here," Toro said.

He then stepped into the batting cage to resume his warmups with a new uniform top.

Toro is in his third season and has played primarily third base, where the Mariners have veteran Kyle Seager entrenched. Toro has also played first base and has one game at second base this season, a position where the Mariners could be looking to upgrade before the trade deadline.

"They're hungry - yesterday we all saw it," Toro said of Seattle's 11-8, come-from-behind win over the Astros on Monday. "They were losing 7-0 and came back. These guys are hungry."