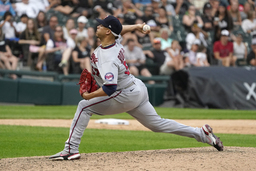 Robles made 45 appearances for the Twins this season, going 3-4 with 10 saves and a 4.91 ERA. He has appeared in 358 major league games overall.

"Everybody has seen our bullpen has done a great job this year, and we wanted to back that up by getting them reinforcements to make sure we have as many good options as possible down the stretch," Boston chief baseball officer Chaim Bloom said.

Boston began the day with the third-best AL bullpen ERA at 3.62.

Chavis hit .190 with two home runs and six RBIs in 31 games for the Red Sox this season.

Scherff has spent time this season with Double-A Portland and High-A Greenville, going 3-1 with a 2.45 ERA.

The Red Sox were relatively quiet before Friday's trade deadline compared to the other playoff contenders in the AL East in recent days.

"Any fan would love to see their team right in the thick of it, and you'd love to see your team making big moves," Bloom said. "We would, too. We just aren't going to do that when we think those moves are actually running counter to our goal."

Red Sox manager Alex Cora was not surprised by all the moves within the division.

"We expected everybody to get better, right?" Cora said. "We got better, too. Everybody is playing for a spot in the playoffs."

Boston did add slugger Kyle Schwarber from Washington on Thursday. He is currently sidelined with a hamstring injury but may be able to play in a couple weeks.

"We think Kyle Schwarber is one of the most impactful hitters that changed hands this week," Bloom said. "This guy is a winner."

The Red Sox plan to look at Schwarber at first base, a position he is unfamiliar with.

"He's excited to do it," Bloom said. "This is someone I would not bet against to really do anything that he sets his mind to do on a baseball field."

Boston also expects to get left-hander Chris Sale back in a couple weeks. He's on a minor league assignment following Tommy John surgery in March 2020.

"He's throwing the ball well," Cora said. "It's not that we're going to put all the pressure of the world for him to carry us, but we know what he can do."