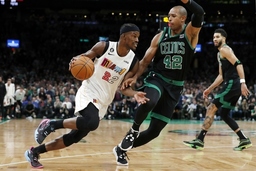 BOSTON (AP) Bam Adebayo scored 28 points, Tyler Herro had 26 and the Miami Heat completed a split of two games in Boston, beating the Celtics 120-116 on Friday night after Jaylen Brown banked in a long 3-pointer to force overtime.

Heat leading scorer Jimmy Butler returned to the lineup and had 25 points in 36 minutes after missing the previous seven games with a sore right knee. He added 15 rebounds.

"Obviously having JB back is big time for us," Herro said. "He helps us in so many different ways."

Kyle Lowry chipped in with 20 points before fouling out in OT for the Heat, who sent Boston to just its second loss in 16 games.

Brown sent the game to overtime by banking in his long 3 with 1.7 seconds to play in regulation. He finished with 37 points.

"It felt good coming off my hand," Brown said. "I know we wanted to get a shot up off the rim as fast as possible, just in case we missed we could get a rebound, a tip out."

The Celtics had won 10 straight at TD Garden.

Boston star Jayson Tatum scored just 14 points on a cold shooting night, going 5 of 18 from the floor, including 0 of 7 on 3-point attempts. He had 49 points in the Celtics' 134-121 victory on Wednesday night.

"That's the biggest thing about the league; you're not going to stop anybody from just scoring," Adebayo said. "I feel like (we're) making him take tough shots every time we play him and living with the result."

Butler hit a clutch jumper over Al Horford, making it 110-107 with 5.1 seconds left in regulation before Brown took a pass near midcourt, dribbled to his right and nailed his shot.

In OT, the teams were tied twice before Butler nailed a foul-line jumper over Horford with 1:45 left, but Brown hit two free throws to tie it.

Adebayo nailed two free throws and, after Tatum misfired on a 3, Butler hit a jumper to seal it.

"Jimmy made two tough, tough baskets," Brown said. "That's just a credit to his work and his skill and his development. He gets going in games like this; on the road in a hostile environment. ... Tonight, two shots that in our defensive scheme we could live with, but Jimmy a big-time player made both of them."

Unlike Wednesday, when shots were open more and both teams were making them effectively (each shot over 50%), defense was tighter and it resembled more of the postseason matchup last season between the pair that went seven games before Boston captured the Eastern Conference title.

Heat coach Erik Spoelstra was asked before the game about the increased scoring in the league and the challenges it presents defensively.

"The playbook has totally shrunk. I remember in the 90s, they were a 100-pages long," he said. "I know that because I'd be on the road and had to put those things together. Now, you're putting together like six to eight plays. It's all the same but it's the manipulation, it's the skill-level and the shooting and all that that makes it a challenge to defend in this league."

Tatum averaged 31.6 points and won the Eastern Conference's player of the month for November, and interim coach Joe Mazzulla was chosen the conference's coach of the month earlier this week.

Celtics: Missed 10 of its initial 12 on 3-point attempts before making seven straight to turn a seven-point second-quarter deficit to a 62-59 edge at halftime. . Singer Donnie Wahlberg sat courtside. . Luke Kornet landed awkwardly on his left leg and walked gingerly before heading to the locker room. He returned the bench later.

Heat: At the Memphis Grizzlies on Monday night.

Celtics: At the Brooklyn Nets on Sunday evening.