Udoka misses Celtics media day, to be ready for camp 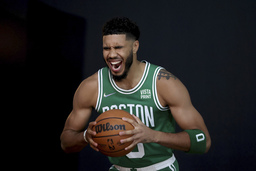 CANTON, Mass. (AP) Ime Udoka will have to wait one more day to get together with his new team.

The Boston Celtics head coach tested positive for a breakthrough case of COVID-19 this month and was in his last day of isolation when the team convened for media day on Monday. Udoka, who is vaccinated, will be able to preside over the first day of training camp on Tuesday.

"I'm feeling normal, as normal as I can," Udoka said over Zoom while other members of the organization met with reporters in person at the team's suburban Boston media day. "Sorry for not being in person, but we'll catch up. Look forward to it."

Hired during an offseason overhaul of the team's brass, when president of basketball operations Danny Ainge retired and coach Brad Stevens left the bench to replace him, Udoka is a former NBA player and longtime assistant who will be making his head coaching debut.

He said he has been asymptomatic except for a "slight headache 10 or so days ago that I probably would have brushed off had I not been informed that I was a close contact of someone who was positive."

Stevens said Udoka's isolation hasn't been a problem because the coach worked to stay connected with his players and staff. Even when he was in Tokyo as an assistant with the U.S. Olympic team, he was helping to recruit free agents.

"Even when he hasn't been there in person, he's been very invested every single minute," Stevens said. "I'm not worried about that. That's an easy part. I'm very glad that his health is OK."

Udoka and Stevens both said they were working to educate the players about the benefits of vaccination. The Celtics are not fully vaccinated, and players such as Josh Richardson have expressed skepticism despite undisputed scientific evidence supporting the vaccine's efficacy.

"We're going to work to educate everybody," Stevens said. "The scariest part for me is just the health of everybody. We've got hospitals that are overflowing and people having to make decisions on who gets oxygen. It's a sad situation and hopefully we fix that quickly."

The NBA has announced testing and social distancing requirements for those who aren't vaccinated, and some players in New York and San Francisco wouldn't be able to play in home games because of local restrictions. Former Celtics guard Kyrie Irving was not at Nets media day, apparently because of the restrictions.

"There are repercussions if you're not vaccinated. We all know that," Udoka said.

Udoka takes over a team that made the Eastern Conference finals in three of the past five seasons but doesn't seem all that close to hanging an 18th NBA championship banner. To a core of Jayson Tatum, Jaylen Brown and Marcus Smart, the team has brought back onetime Celtics Al Horford and Enes Kanter and added Dennis Schroder, Joancho Hernangomez and Richardson.

"Everything is a fresh start for us. That's kind of my mentality," said Smart, who will be entering his eighth season in Boston and is the longest-tenured player on the team. "With Brad moving on and Ime coming in as a new coach. Just trying to get back to the team we were in the past and bringing it back."

In other news, Stevens said Jaylen Brown is fully cleared to practice after wrist surgery and missing the last month of last season. Only forward Juwan Morgan is "slightly limited for one day ... with a minor, minor hamstring" issue.

Brown said he feels rejuvenated after a long stretch that sent the players from the pandemic bubble of 2020 with only a short break before beginning the next season.

"My body really felt it. ... Right now going into the year, my body feels fantastic," he said. "I'm feeling good. Some days are better than others, with my wrist at least. But even on my bad days, I feel great."