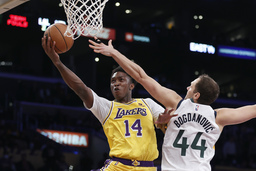 EL SEGUNDO, Calif. (AP) The Los Angeles Lakers have signed forward Stanley Johnson for the rest of the season after the Orange County native's strong performances over the past month.

The deal announced Thursday also includes a team option for next season on Johnson, a seven-year NBA veteran.

The Lakers signed Johnson to a 10-day contract on Dec. 24 through the NBA's hardship exemption. He immediately became a steady contributor in Los Angeles' inconsistent frontcourt while playing solid wing defense, and he signed two additional 10-day contracts before the Lakers locked him up for the rest of the year.

Johnson began his NBA career in 2015 with the Detroit Pistons, who chose him with the eighth overall pick. He played parts of the last two seasons with Toronto.