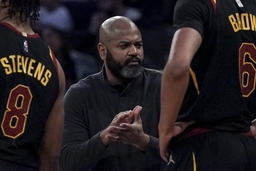 CLEVELAND (AP) The Cavaliers made their first move before the NBA draft tipped off.

Adding another asset to perhaps use to bolster its roster, Cleveland acquired the No. 49 selection from the Sacramento Kings in exchange for the rights to forward Sasha Vezenkov and $1.75 million.

The deal, which was finalized hours ahead Thursday's draft, gives the Cavs four picks - No. 14 and three second-rounders, Nos. 39, 49 and 56.

An extra second-round pick gives the Cavs' front office another asset to potentially jump up into the late part of the first round. Cleveland's in the market for another wing player to supplement one of the league's best young rosters.

After winning just 22 games in 2020-21, the Cavs went 44-38 last season under coach J.B. Bickerstaff and barely missed the playoffs. They made the play-in tournament but lost to Brooklyn and Atlanta.

This year is the first time the Cavs haven't drafted in the top 5 since 2018.

Vezenkov was acquired in 2021 from Brooklyn as part of the three-team trade that brought All-Star center Jarrett Allen to Cleveland. The Nets drafted Vezenkov with the 57th pick in 2017.