Thunder rookie Holmgren learns ways of NBA while on the mend 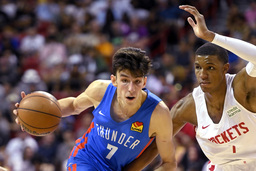 The No. 2 pick in the 2022 NBA draft suffered a right foot injury during a pro-am game in August while defending as LeBron James drove to the basket on a fast break. He had surgery, and the Thunder declared him out for the season.

"I've never had a serious injury in my life, so I didn't really know, I had nothing to base it off of and compare to," Holmgren said Thursday. "So when it happened, I had to get it looked at and see how serious it was. I didn't imagine anything like this."

Holmgren, a versatile 7-footer who had great moments during summer league, is dealing with being sidelined as the Thunder start training camp this week.

"Definitely something that I really had to put my mind to and spend some time to think on," he said. "And kind of come to some conclusions on things and really settle my mind so I could kind of stop focusing on what happened and focus in on what's going to happen, what I've got to do to get where I need to be."

Even without practicing, he has already left an impression on his teammates.

"He's a great guy," guard Lu Dort said. "I can already feel a connection with me and the rest of the team. He's a pretty vocal guy, too. He talks a lot, and that's good for the team."

Holmgren said his only workout limitation is that he can't put weight on the injured foot. So, that forces him to focus on other aspects of the game. Coach Mark Daigneault said Holmgren has been working hard on film study.

"It just comes down to putting my mental energy towards it, learning how to really be a professional in areas off the court," Holmgren said. "I've dedicated so much time to really hustling at my craft on the court. Now, this event is making me step back and kind of rework how how I do things. And one of those ways is to become professional with watching film and speaking with coaches, trying to learn, watching what's happening and really being engaged, in trying to get better with different avenues."

Holmgren has spoken with Joel Embiid about his injury. Embiid, the reigning NBA scoring champion, was the No. 3 pick in 2014 before missing his first two seasons with foot issues.

Holmgren hopes he can recover as well as Embiid.

"What I'm trying to do right now is just kind of soak up all the knowledge of how things are done around here, how they're going to be done going forward," Holmgren said. "So when I'm ready to get get back in there, I can just kind of seamlessly plug myself in."

Holmgren is expected to be ready for the start of next season. He said he's trying to keep his thoughts positive.

"It all comes down to keeping a level head because there's so many ups and downs," he said. "Unfortunately, this is a down. But I've got to keep my head level and focus on getting better. And no matter what the circumstances are, that's the goal."

"We'd like him to be out here," Daigneault said. "But since he's not, we're certainly going to make a lot of investments, and the thing that makes me the most optimistic about that is the approach that he takes."