Sidney Crosby out as Penguins try to finish Rangers 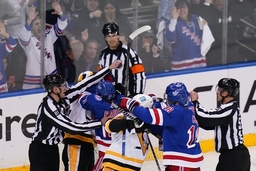 The Pittsburgh Penguins will have another chance to close out their first-round playoff series Friday when they host the New York Rangers for Game 6.

They will have to do it without star center and captain Sidney Crosby.

Crosby left in the second period of Wednesday's 5-3 Game 5 loss in New York after he got leveled by Rangers defenseman Jacob Trouba, when it appeared Crosby took an elbow to the head.

Trouba did not draw a fine or suspension for the hit. Sullivan took the high road: "It's not my responsibility to share my opinion on whether or not it (it was a legal hit). That's the league's job."

It's Sullivan's job to prepare his team, regardless of who is available. After Crosby left Game 5 with Pittsburgh leading 2-0, the Penguins stutter-stepped and the Rangers surged to the comeback win.

"We have a lot of depth at all the positions, and we believe we have what it takes to win," Sullivan said. "We have a capable group. This group has always had the next-man-up mentality, and we'll continue to do that moving forward."

Crosby leads the Penguins in the series with nine points. Fellow center Evgeni Malkin moved up from the second line to Crosby's spot between wingers Jake Guentzel (eight points) and Bryan Rust (six). It seems likely that's where Malkin will play Friday with Crosby sidelined.

"(Malkin) is a superstar player," said Guentzel, who leads Pittsburgh with seven goals. "He's a guy that likes the puck on his stick, and he's just another unreal passer. For me, (it's about) just trying to find open spots and get him the puck as much as possible."

In addition to Crosby, Sullivan ruled out No. 1 goaltender Tristan Jarry and defenseman Brian Dumoulin. Winger Rickard Rakell will be a game-time decision.

The Rangers, meanwhile, gathered momentum by staving off elimination with the Game 5 rally. Winning in Pittsburgh on Friday would take the series to Game 7 Sunday in New York.

One contributing factor was the play of what is called the Kid Line, the forward combination of young players Alexis Lafreniere, Filip Chytil and Kaapo Kakko.

Lafreniere had a goal and an assist, Chytil a goal and Kakko an assist during the Rangers' comeback Wednesday.

"We are young guys, but I think we have built from every game," Chytil said. "I think we have that chemistry, and we are just trying to play hockey, have fun, and do the right things. I think we are getting better each game."

Lafreniere said, "I think we did a good job of staying calm and sticking to the game. It's a lot of fun, but we have to work hard every shift."

The Rangers also benefited from a bounce-back game from goaltender Igor Shesterkin.

Widely considered the favorite to win the Vezina Trophy as the top goalie during the regular season and on Thursday named a finalist for the Hart Trophy as league MVP, Shesterkin was yanked in each of New York's losses in Games 3 and 4 in Pittsburgh, but coach Gerard Gallant was defiant in saying he is sticking with Shesterkin.