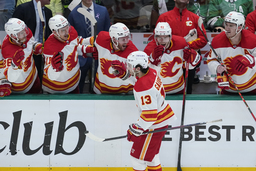 The history of the Battle of Alberta is not lost on the Calgary Flames and Edmonton Oilers.

The opportunity to write a new chapter when they open their Western Conference second-round series Wednesday in Calgary means plenty.

The Flames and Oilers last met in a Stanley Cup playoff series in 1991, before many of the participants of this year's clash were even born.

"I haven't been to the second round since my first year in the league, so this is really exciting for me, especially being the Battle of Alberta," Flames defenseman Mike Stone said. "I've been in this city long enough to know what that means."

The Pacific Division-champion Flames finished seven points ahead of the Oilers during the regular season. The clubs split their four meetings, with the Oilers taking the first two clashes before the Flames won the final two.

Calgary advanced after finally dispatching the Dallas Stars, a wild-card team, in a seven-game series that went the distance because of a stellar goaltending performance from Dallas' Jake Oettinger. The Oilers also needed seven games to beat the Los Angeles Kings.

Through the past three decades, Flames-Oilers clashes boasted extra oomph, but a playoff series takes a rivalry to new levels, something Flames forward Milan Lucic learned from his days with the Boston Bruins when they met the Montreal Canadiens.

"It adds to it. The history and the rivalry, all that type of stuff," Lucic said. "It feels everything is magnified and everybody is more into it, the fans, the emotions, the media, the storylines."

The series is noteworthy for more than just the two city rivals. Edmonton is led by its dynamic duo of Connor McDavid and Leon Draisaitl, who finished first and fourth in the league scoring race, McDavid with 123 points and Draisaitl with 110.

But the Flames boast a trio of 40-goal scorers in Johnny Gaudreau, who finished second in the scoring race with 115 points, Matthew Tkachuk and Elias Lindholm. The edge may be in Calgary's defensive game, which finished third in goals against, while the Oilers placed 18th.

That said, the Oilers dispatched the Kings by taking their defensive play to another level the last two games.

"We took steps just in the way the Los Angeles Kings played and their adherence to their structure," coach Jay Woodcroft said. "It forced us to do some things and forced us to solve problems to get out of our comfort zone.

"For us, I don't think anything great ever comes out of comfort zones, so it was nice to get pushed and forced to come up with different types of solutions to things."

"The hype is real life. There are a lot of passionate fans in Alberta. As players we're trying not to get consumed by that," Oilers goalie Mike Smith said. "There's a lot of extra noise, but there's a focus with this group that we have a job to do, and it didn't matter who we were going to play against."

On the injury front, Calgary defenseman Chris Tanev, who missed Game 7 due to injury, practiced Tuesday and should be back in the lineup.

The Oilers practiced without forwards Draisaitl, who is nursing a suspected ankle injury, Ryan Nugent-Hopkins and Evander Kane, but general manager Ken Holland said all three are expected to play in the series opener.