Rangers, Hurricanes aim to keep up thrills in Game 1 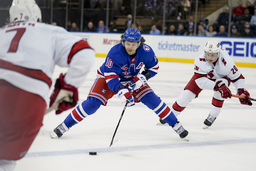 The New York Rangers and Carolina Hurricanes are set to meet in Game 1 of their best-of-seven, second-round Stanley Cup Playoff series on Wednesday in Raleigh, N.C.

Both are coming off thrilling Game 7 victories in the first round.

Carolina eliminated the Boston Bruins with a 3-2 win on Saturday.

New York rallied to win its first playoff series since 2017 by beating the visiting Pittsburgh Penguins 4-3 in overtime on Sunday.

The Rangers were down 3-1 in the series and 3-2 late in Game 7 before Mika Zibanejad tied the score with 5:45 remaining in regulation. Artemi Panarin won it with a power-play goal 4:46 into overtime.

Several players on both teams likely have clear memories of the last time the Rangers won a playoff series.

Carolina forward Derek Stepan had the game-clinching empty net goal against the Montreal Canadiens in 2017 to lift the Rangers to a 3-1 victory and a 4-2 series win.

Another forward for the Hurricanes, Jesper Fast, and defensemen Brendan Smith and Brady Skjei, also played for the Rangers in the 2017 postseason.

A key player for the Rangers this season has been forward Chris Kreider, who scored a career-high 52 goals during the regular season, well above his previous high of 28 during the 2016-17 season and matched two years later.

Kreider had four goals and two assists in four games against Carolina this season, scoring in every meeting.

Panarin and Zibanejad also set NHL career highs in assists and points during the regular season.

Zibanejad was a big reason the Rangers advanced out of the first round, totaling three goals and eight assists against the Penguins.

"When Mika started to play his game, he was outstanding, and that's what we want him to do," New York coach Gerard Gallant said. "He's got to think of himself as one of those best players, and that's what he is."

Sebastian Aho led the Hurricanes in goals (37), assists (44) and points (81) during the regular season, and he pestered the Rangers with three goals and four assists in the season series.

A pair of defensemen led Carolina in scoring against the Bruins.

"Everyone's playing lights out," Brind'Amour said. "Everybody's into it, and then as it goes along, it's just different things that are hard. It's hard to stay emotionally engaged for two months. It's hard for the fans to stay emotionally engaged. Everything about it gets harder and harder. The team that can stay with it obviously is the team that generally comes out on top."

Rangers goalie Igor Shesterkin has the second-worst goals-against average in the postseason at 3.66 but has countered with a respectable .910 save percentage.

"He's Mr. Reliable back there," New York defenseman Jacob Trouba said. "Everybody knows he's going to show up in big games and play well and make saves he's probably not supposed to make."

Carolina goalie Frederik Andersen has been sidelined since April 16 because of a lower-body injury, and Brind'Amour doesn't believe Andersen will return for this series.

In the meantime, Antti Raanta has been solid in net for the Hurricanes, posting a 2.37 GAA and .927 save percentage in six playoff games.