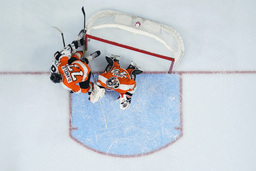 PHILADELPHIA (AP) Kevin Fiala scored 1:09 into overtime to lead the Los Angeles Kings to a 4-3 victory over the Philadelphia Flyers on Tuesday night.

Anze Kopitar scored two goals and Samuel Fagemo added one for the Kings.

Los Angeles dominated the third period but couldn't find the tiebreaking goal until the extra session. Fiala took the puck the length of the ice and elected to shoot on a 2-on-1, firing a wrist shot under the left arm of goalie Carter Hart for his 17th goal and team-leading 50th point.

Pheonix Copley made 28 saves for the Kings. Hart stopped 34 shots.

The teams each scored a pair of goals in an entertaining first period.

Van Riemsdyk put Philadelphia up 1-0 early by finishing a 2-on-1 with Owen Tippett. A great zone entry and pass by Tippett setup van Riemsdyk for his eighth tally of the season.

Kopitar tied it with his first goal, a slap shot from the point just four seconds into a power play after van Riemsdyk was whistled for tripping. Philadelphia went back in front just over a minute after the Kings' goal on Allison's outstanding second-effort play with 9:33 left in the period. Allison beat defenseman Sean Durzi at the blue line, got in all alone on Copley and then stayed with the play after Copley's initial save with a rebound goal.

Kopitar evened the score again 1:13 later on a wrist shot from close range after Adrian Kempe set him up from behind the goal line.

The Flyers went up 3-2 midway through the second on Ristolainen's backhander. The Kings weren't able to even get a shot off during two consecutive power plays early in the period, but they scored the tying goal with 1:24 left before the intermission when Fagemo fired a hard wrist shot from the slot past Hart's glove.

The second period ended with Travis Konecny and Mikey Anderson battling along the boards after a hard hit by Anderson. Both were given roughing minors in a penalty-filled period that saw four Flyers penalties and two for the Kings.

NOTES: Fans roared when an image of Eagles center Jason Kelce was shown on the video board, followed by the club's fight song. The Eagles host the 49ers in the NFC Championship Game on Sunday. . Philadelphia dropped to 10-12-2 at home while the Kings improved to 13-8-4 on the road.

Kings: At Florida on Friday night.

Flyers: At Minnesota on Thursday night.