Dylan Larkin senses optimism others do not with Red Wings 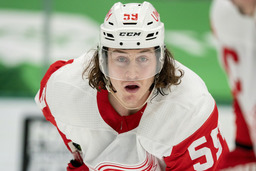 DETROIT (AP) The Detroit Red Wings have been mired in a long, painful rebuild and the end doesn't seem to be in sight from outside the organization.

The last time they made the playoffs five years ago, Dylan Larkin was a rookie. When the captain and center looks at the reshaped roster, he doesn't have to feign optimism.

"It's exciting, more so than any of my training camps in the past," Larkin said. "We've had more competition at every part of our lineup."

"I think we're making progress, but it may not necessarily relate into wins and losses," Yzerman said.

The Red Wings can help their chances if they start the season healthy and stay that way for their first 82-game season in two years. Larkin is recovering from a neck injury that limited him to 44 games last season. Tyler Bertuzzi is coming back from having back surgery in April.

"They're a pair that I'd like to keep together all season if I can," said coach Jeff Blashill, who was given a contract extension despite a career record of 177-221-62 in Detroit.

Minutes into his first practice at training camp, forward Jakub Vrana hurt his shoulder to pose a potential problem for a team that has struggled to score in recent years.

Bertuzzi does not plan on being vaccinated, citing his freedom of choice.

The 26-year-old forward might end up losing more than $450,000 in salary for not playing the team's nine games in Canada, where he will not being able to cross the border without a two-week quarantine.

The Red Wings will likely be at a disadvantage in Canada playing without a wing capable of a 50-point year if he played the entire season.

"Certainly for those games, we'll be missing a piece of the puzzle," Blashill said.

Detroit drafted Moritz Seider with the No. 6 pick overall two years ago and the 6-foot-4, 197-pound German is expected to be a key player as he makes his NHL debut.

"He's big, he's smart, he's got confidence," Blashill said. "He's got some toughness to him. He's got the opportunity to be a really good player and we're going to give him that opportunity to do that and then he's got to grab it by the horns."

Detroit dealt the rights to pending free agent netminder Jonathan Bernier and the No. 94 pick overall in the draft to Carolina for goaltender Alex Nedeljkovic and gave him a $6 million, two-year deal. As a rookie with the Hurricanes, he led all goaltenders with at least 22 games with 1.90 goals-against average and .932 save percentage.

Yzerman signed Pius Suter to a $6.5 million, two-year deal after his promising rookie season in Chicago. The Swiss forward had 14 goals and 13 assists in 55 games with the Blackhawks.

Detroit's turnaround is tied to its draft picks producing and the franchise needs two of them to provide more of a return on its investment.

Michael Rasmussen, drafted No. 9 in 2017, has just 30 points points in 102 games over two years. Filip Zadina, the No. 6 pick overall three years ago, just 37 points in 86 games over three seasons.

Detroit will find out in its season-opening game how it stacks up with the best, hosting the two-time defending champion Tampa Bay Lightning on Oct. 14. The Red Wings play their first four games at home and are at Little Caesars Arena for nine matchups within the first month of the season, potentially giving them a chance to get off to a solid start.