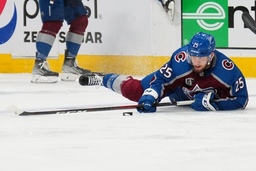 DENVER (AP) Keep the champagne chilled. It's back to the slushy ice of Amalie Arena for the Colorado Avalanche after they failed to close out the Tampa Bay Lightning in the Stanley Cup Final.

"It's not supposed to be easy, and it's not going to be easy," Avs captain Gabriel Landeskog said after Colorado's 3-2 loss in Game 5 sent this sensational series back to Tampa, where the Lightning can even things up Sunday night.

The Avalanche are 8-1 on the road in these playoffs, including an overtime victory in Game 4, and they'll try to bring home Lord Stanley's Cup this weekend.

Coach Jon Cooper found a way for the Lightning to finally bottle up Landeskog and Mikko Rantanen to cut Colorado's lead in the series to 3-2.

Ondrej Palat sent the puck through Darcy Kuemper's legs with 6:22 remaining in the third period to break a 2-2 tie and the Avalanche were whistled for too many men on the ice with 2:38 remaining as they were trying for the equalizer.

Cooper had complained 48 hours earlier that Colorado's game-winner in overtime came with six skaters on the ice, and the Avs didn't get away with it this time.

The breaks just didn't go Colorado's way in Game 5. Neither did the calls as the Lightning knocked the Avalanche around, with or without the puck on their sticks.

Tampa Bay went with four forwards when Avalanche star Cale Makar was whistled for tripping on a disputed call in the second period during a 4-on-4 skate. Nikita Kucherov capitalized moments later by scoring just the second goal in 17 power play chances by the Lighting in the final.

The Avalanche and their frenzied crowd disagreed with the call, but coach Jared Bednar didn't do like Cooper had the previous game when he walked off after taking just one question while lamenting the Lightning's tough luck.

"I didn't love that call because there was no intent there," Bednar said. "It looked to me like he kind of tripped over his stick. It's a tough one. They got their only power play goal on that one, so that hurt. It stung a little bit. But it is what it is, you've got to roll with the punches."

And they took plenty of those.

Still, the Avs rallied for the second straight game and Makar atoned for his costly penalty with a goal early in the third period that tied it at 2 and sent Ball Arena into a frenzy.

Palat's goal quieted the crowd, and now the Lightning are in position to knot the series this weekend back in Florida, where Avalanche center Nazim Kadri complained about the bad ice in Game 4 before scoring the game-winner in overtime.

Landeskog declined to rip the officiating: "Some of those calls we could probably have done without but at the end of the day we're focusing on what we got to do."

Added Makar: "I'm not here to talk about the refs. We have to battle through that. It's playoffs. There's going to be discrepancies game to game with different people and it is what it is."

Playing in their 67th postseason game since the first round of the 2020 playoffs, the Lightning kept alive their hopes of becoming the first team to win three consecutive Stanley Cups in the salary cap era.

To do that, they'll also have to become the first team since the 1942 Toronto Maple Leafs to bounce back from a 3-1 deficit to win the Cup.

One down, two to go.

"Obviously they have a lot of experience in moments like this, not necessarily being down in the final but at the end of the day we had a great opportunity tonight," Makar said. "Unfortunately that one's on me for losing that one and not at least getting to OT. So, onward, upward."

Makar said it'll be even harder to uncrown the back-to-back champs now but he said the Avalanche have some pedigree to rely on, too. They're 15-4 in the playoffs and haven't lost back-to-back games since April 28-29.

"It's the toughest challenge in sports to knock a team out," Makar said. "So, for us it's just refocusing and moving on. We have another great opportunity in Tampa."

If they do that, they just might bring the Stanley Cup home with them.