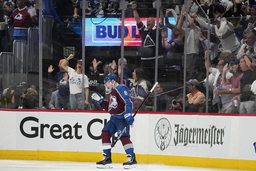 Cale Makar led the Colorado Avalanche in scoring on the way to winning the Stanley Cup. It was no surprise the dynamic defenseman was the unanimous choice for the Conn Smythe Trophy as playoff MVP.

"It's surreal to me," Makar said. "You grow up, you see that as a kid, you have pictures on your wall. All I could think about was everybody that got me here."

No one played or produced more for Colorado during this Cup run than Makar, who also won the Norris Trophy as the NHL's top defenseman during the regular season. The 23-year-old skated 27 minutes a game and led the Avalanche with 29 points in 20 games - more than anyone except Edmonton stars Connor McDavid and Leon Draisaitl.

Asked after the Cup-clinching victory how other teams could emulate Colorado, captain Gabriel Landeskog thought for a second and said with a grin, "Get a Cale Makar somewhere."

He showed during this run why he's one of a kind. Makar's free-wheeling play led to eight goals to his credit and many more he helped create along the way.

Makar is the second defenseman to win the award over the past three years. He follows Victor Hedman of the Tampa Bay Lightning, the back-to-back defending champions eliminated by Colorado in the Stanley Cup Final on Sunday night.

"We've seen him play this way from Day 1 of the season," coach Jared Bednar said. "This guy is elite, and with him, the job he does for us offensively and defensively, watching him play, how dynamic he is, he's just the best defenseman in the game right now."

And the best player in the playoffs, bringing a wildly creative flair on offense to the speedy, force-the-turnover defense the Avs need to make things go - even if often reluctant to take credit.

"I don't think anything goes to his head," general manager Joe Sakic said. "Cale is a hard-working, humble guy. He does not pay attention to any outside noise. He deserves everything he's getting. Such an unbelievable hockey player, and he plays both ways."

Makar's evolution into one of hockey's top stars has taken time since playing junior hockey in Canada's province of Alberta and getting picked by the Avalanche fourth in the 2017 draft. He helped Canada win world junior gold in 2018 and declined an invitation to represent his country at the Olympics without NHL talent to continue honing his game at UMass-Amherst.

"For my development, I just didn't think it was the right thing to do," Makar told The Associated Press in September. "I needed more time to develop my defensive aspect of the game. I just felt like at the Olympics I wouldn't get that same experience, that they'd maybe just use me for my strengths rather than allowing me to work on my weaknesses."

Makar cared so much about shoring up those weaknesses that he went back to college for a second season before making his NHL debut for Colorado in the 2019 playoffs. He felt like he wanted to be "overripe" for playing in the pros and thought facing older competition helped gear him up for that.

"For young defenseman that can be a little bit of a struggle, and once you start getting on it early and working on it, then your game starts to take a turn," Makar said before the final. "But it's still something that I try to improve on. It's not something I feel like is a staple of my game, so you have to be better at it every day."

Makar went into the Lightning series as the Conn Smythe front-runner and then didn't get a shot on goal in Game 1, which the Avalanche won in overtime. After watching Tampa Bay players block so many attempts, Bednar recalled adjustments Makar made earlier in the playoffs and never lost faith in the young defenseman's ability to make a difference.

"I'm never going to tell him not to shoot," Bednar said. "I trust him and his instincts. ... If he sees something he likes at the net, I want him to send it there."

Makar began putting his stamp on the series with two goals in Colorado's 7-0 rout of Tampa Bay in Game 2 to take a 2-0 series lead. He was drawing rave reviews from opponents well before the final.

"He's an amazing player," Edmonton defenseman Tyson Barrie said in the middle of the Avalanche sweeping the Oilers in the Western Conference final. "Since he's been in the league, he's been exceptional and it's amazing the way he's creating offense and still playing defense. He's as good as they come on the back end and the way he skates and moves the puck and retrieves the puck, he's got every tool."

Makar used those tools to help this core group hoist the Stanley Cup for the first time.