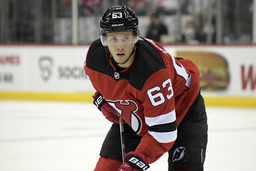 General manager Tom Fitzgerald announced the signing Wednesday before the two sides were scheduled to go to arbitration. Bratt will be a restricted free agent at the end of the upcoming season and again have arbitration rights.

Bratt's six game-winning goals also led the club and were a career-high.

In 307 career contests, Bratt has 70 goals and 133 assists, which are the most earned by an NHL player who was selected after the second round of the 2016 NHL Draft. The sixth-round pick became the first Devil since Taylor Hall in 2017-18 to record 70 or more points in a single season.